Of women and ships: The stories behind the names

The Mémoire des lieux tells the story of the founding, the activity and then the decline of the Chantiers maritimes de Charlevoix company's facilities. It also recounts the rebirth of the site in 1981 with the creation of the Charlevoix Maritime Exhibition, which became the Musée maritime de Charlevoix.

Here, in a tone of confidence, the museum, the shipyard, and the schooners blend together, knit together, and splice together in this exhibition the paying of homage to the women of schooner country. 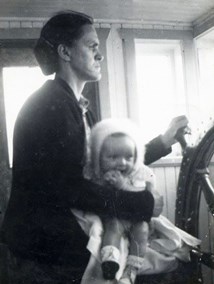 End of the Journey

End of the Journey is a photographic excursion along the Charlevoix shore. Filled with nostalgia, this exhibition reflects the period when wooden schooners stopped sailing. Many of the abandoned schooners continued their journey by inspiring the artists and reviving the memories of sailors. They are immortalized here by photographer Michel Tremblay. The final trip includes a few scale model ships.

Sailing Under Full Canvas pays tribute to Captain Joseph-Arthur “à Zélada” Desgagnés (1903-1998). A native of the town who sailed for nearly 60 years, Captain Desgagnés was alive during the golden age of sail-powered and motor schooners. The exhibition showcases objects that belonged to the captain, as well as several paintings created after he retired from coasting.

Presented in a former lighthouse, Ropework Ahead is a small exhibition that teaches about the various parts of the rigging on sail-powered schooners’: their use, their function and the most common types of fibres used.